Get Your Own Scroller 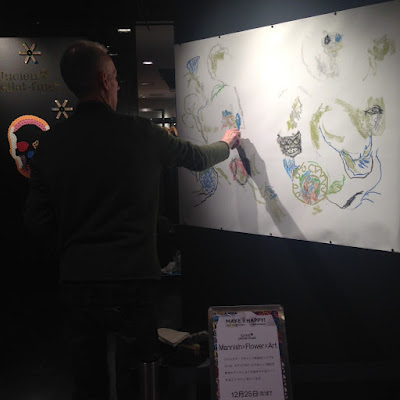 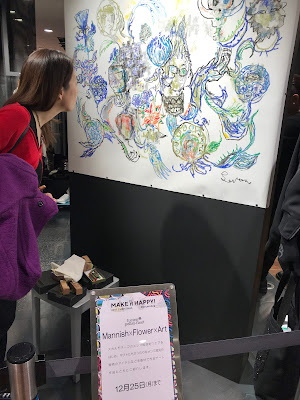 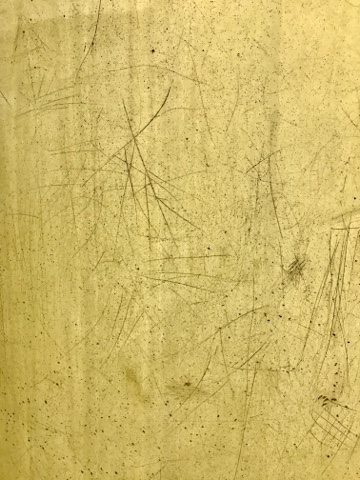 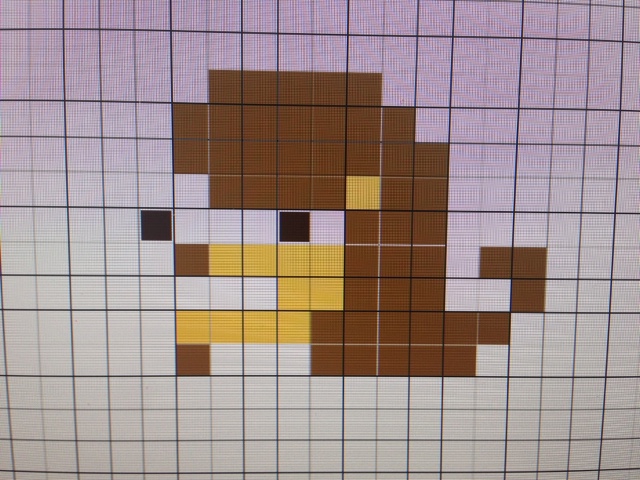 “Is that McCluskey?” said the voice in the tube.
“Yes, Chef!” said McCluskey. “I’m sorry about the chocolate!”
McCluskey explained how he’d been attacked by brigands in the shadows of the Chilly Peaks and how the condor had appeared and made off with the luxury yak milk white chocolate the chef had ordered.
“Well, that’s bad luck, but what am I going to do? There’s a rumour going round the palace about the chocolate and the Emperor must have heard it by now. He’ll be mad if it doesn’t materialise,” said the chef.
Just then the condor appeared out of nowhere again and perched on the blimp’s landing ski. The receiver in the tower ducked down below the window, and pressed a button to call security as the bird flapped it’s long, broad wings to balance itself. A siren started wailing.
“I don’t feel like this now,” said the condor, dropping the chocolate into the blimp basket. “Can I exchange it for a lettuce?”
“What’s going on?!” said the chef’s voice from the tube. “Who’s that?”
Guards appeared in turrets, on walls and roofs and at gates, their armour and helmet glinting in the new day’s sunlight. A strange-looking defence-apparatus came towards the condor, aiming to shoo it off the Imperial Palace premises - with force if necessary.
“Stop!” shouted McCluskey. “It won’t do you any harm! It’s just a bit hungry that’s all!”
McCluskey let go of the speaking tube, and sprinkled some vinegar on the last lettuce and gave it to the condor.
The strange apparatus came to a halt and the guards watched as the condor crunched the lettuce and swallowed it.
“Got any more?” asked the condor.
“That was the last one, I’m afraid. . . ” said McCluskey.
The guards raised their weapons ready to attack. The apparatus tensed on it’s long, wiry legs.
“Don’t shoot!” cried McCluskey. 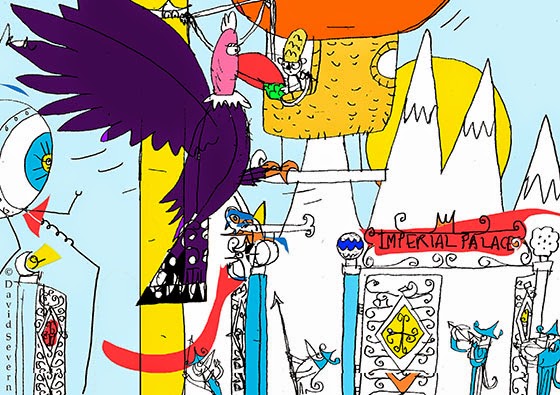 Terrible, nerve-racking seconds elapsed. The guards gripped the ends of their arrows with their fingertips.
“I’ll bring some more lettuce next time!” said McCluskey.
“OK, don’t forget,” said the condor.
“There’s some other leafy things you might like,” said McCluskey, still eager to encourage the bird away from meat-eating while it’s enormous beak was so close. “There’s cabbage, kale, spinach, rocket and loads of others. They’re all tasty and good for you!”
“OK,” said the condor. It flapped it’s enormous wings and the guards took aim.
“Wait!” Wait!” shouted McCluskey, leaning out of the blimp basket.
The guards held their fire as the condor took off, making the blimp shake.
“I’ve got it, Chef! I’ve got the chocolate!” shouted McCluskey into the tube, as he watched the condor fly off into the distance.

Meanwhile, back in their stinking hideout in the shadows of the Chilly Peaks, the brigands poured rum on their cornflakes. They were still fed up about not getting the chocolate.
“I had it in my hand!” said the leader. “I’ll get that condor if I see it again!”
“What about that pigeon?” said one of the men, and the rest of the crew sniggered.
“Yeah,” said another, “the pigeon that decorated your coat!”
“Splat!” said another.
“Don’t cross the white line!” said another.
The leader scowled and banged his fist down on the table. The men all froze and looked at him.
“Well,” he said, smiling wickedly, “I’m glad it was the pigeon, and not the condor!”
And they all laughed heartily.

McCluskey was determined not to let the brigand leader have the yak milk white chocolate, but when the angry, hairy, guano-stained bandit climbed into the blimp’s basket the smell was unendurable.
“Here! Take it!” said McCluskey, trying not to breathe.
“Ah-ahhh!” said the brigand, grabbing the chocolate. “Well done,  Sonny Jim!”
The brigand jumped back onto the plank and held up the chocolate:
“Look at this, men! The absolute pinnacle of luxury! The acme of good taste! An epicurean masterpiece! Sweet perfection!” he shouted.
“Hooray!” cried the brigands on the deck of their craft. “Quick, bring it back here and let’s share it out!” said one.
“As for sharing, I think I shall have a bigger portion,” said the leader.
“All right! Hurry up!” said one of the men.
“Let me see. . . “ said the leader. He felt the number of squares through the chocolate’s paper and foil wrappers with his thumb. “So that will be twenty-eight for me and.. none for you lot!”
The brigands jumped onto the plank and lunged for their leader. “Mutiny!” shouted the leader, trying to hold the chocolate up out of reach of the grasping brigands.
Out of the murky, pre-dawn sky came the condor. It swooped down on its enormous wings and took the chocolate in its talons, leaving the brigands tottering about pathetically on the plank.
“Hooray!” cried McCluskey.
“Come back, you thieving, overgrown crow !” shouted the leader.
The brigands were surprised when the condor did come back, swooping in and knocking them off the plank like a bowling ball hitting ten pins.
“Strike!” shouted McCluskey.
The brigands screamed and snorted as they were left dangling - hanging on to the plank by their fingertips. McCluskey opened the throttle of the blimp and coasted up and away. When he was at a safe distance he looked back and saw the leader was back on top of the plank, pulling his mutinous crew back up one-by-one, giving each one a reproachful look as they slunk back to their craft.
Now free, McCluskey opened the throttle of the blimp and headed at full whack to the Imperial Palace. The Chilly Peaks were now lit up by the sun. 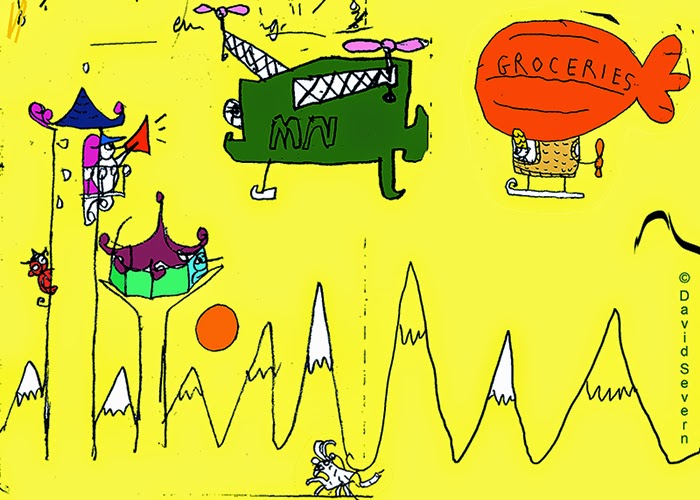 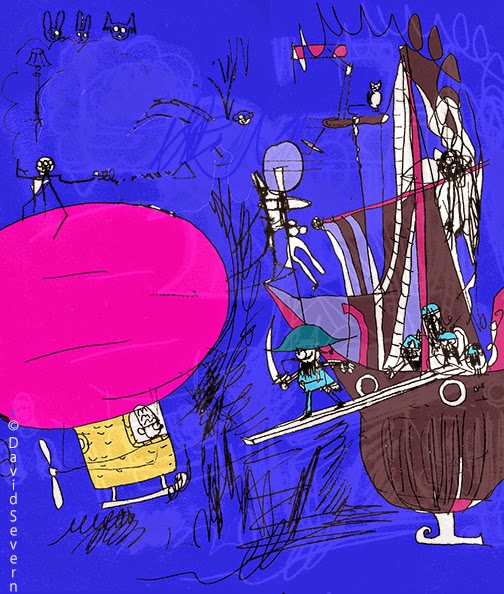 The brigands’ dirty craft drew nearer to the grocery blimp. McCluskey could see them on the deck. They all had twisted hair and knotted beards. They smelt really bad.
“Give us all your valuables!” shouted the leader, gesticulating with a rusty cutlass.
“I haven’t got anything valuable!” said McCluskey.
“Arr... they all say that!” shouted the leader, and all the brigands roared with laughter.
“I deliver groceries!” pleaded McCluskey.
“Groceries!” shouted the leader. “Well, we’ll have your bottles of champagne and your tins of caviar then!”
“I’ve only got lettuces - and I need those. The Chef at the Imperial Palace is waiting for them.”
“Lettuces?!” said the leader. “We don’t like lettuces!”
The brigands all jeered and grumbled.
“Surely you can do better than that?” said the leader. “I’ll bet you’ve got something special for the Emperor. Some chocolate perhaps? We know he’s got a sweet beak. You could give it to us and we’ll let you go on your way with your nasty lettuces!”
There was more cheering from the deck.
“I haven’t got anything!” said McCluskey.
“Hand it over, Sonny Jim!” said the leader. “Come on, we haven’t got all day you know!”
McCluskey was determined not to let the brigands have the yak milk white chocolate. He took one of the lettuces and threw it at the stinking craft. The brigands all ducked and laughed, pretending to be frightened.
McCluskey threw some more lettuces at them.
“Arrgh, I’m hit!” cried the leader sarcastically, holding his hand to his head. The brigands howled with laughter. The leader picked up one of the lettuces and tossed it up in the air. As it fell, he swished his cutlass back and forward through the air energetically, leaving a neat pile of shredded lettuce on the deck.
“Now, come on Sonny Jim,” he said darkly, “let’s have it!”
McCluskey was determined not to relinquish the chocolate, but watched helplessly as the brigands extended a plank from their craft and the leader stepped up onto it.
“Get the chocolate out, Sonny Jim!” he said. “I’m coming to get it! There’s no guarantee that I won’t slip and accidentally cut your ear off, but the chances of that happening may be less if you hold the chocolate out so that I can take it easily and concentrate on balancing!”
“Don’t look down!” cried one of the brigands, causing a great laugh from the deck. Without turning around, the leader made a rude gesture towards his crew.
“Don’t fall off!” cried another brigand. More laughter.
The leader wobbled on his high-heeled boots and flung his arms around.
“Shut up, you fools!” he shouted, annoyed. “You’re putting me off!”
“Don’t wet yourself!” cried a third brigand. Huge laughter ensued. Even McCluskey couldn’t help sniggering. Before the leader had chance to act on that advice, a pigeon flew past and got him with a streak of the white stuff.
“Gnah!” shouted the leader, lunging at the dirty bird with his cutlass. “My best jacket!”
Uncontrollable laughter ensued.
“Stop laughing, you filth!” shouted the leader, “you’re shaking the plank!”
But the leader was a hard nut, and he edged along the shaking plank to within a yard of the blimp’s basket.
“Give me the chocolate!” he demanded. “I’m going to eat it all myself - that’ll show those wretches who's boss!”
“It’s way past its sell-by date!” bluffed McCluskey.
“I don’t care!” said the leader, “so am I!”
“It’s gone mouldy!” bluffed McCluskey.
“I like a bit of mould!” said the leader.
“There are ants crawling around in the grooves between the squares!” bluffed McCluskey.
“Don’t mind!” said the leader.
“It smells awful!”
“I’ll hold my nose!”
“It’ll taste really bad!”
“I’ll be the judge of that!”
“Err. . . “ McCluskey couldn’t think of anything else to say to deter the salivating brigand leader, who now lifted a leg to climb into the basket.

Which way do you go in summer?

Which way do you go in summer?

How are you viewing this blog?

What is your favourite food?

What do you like to do in your free time?

Where is your best hiding place?

Go back in time: